Graphcore decided to open-source Argon Streams AV1 to enable community-led development of the underlying technology in new directions, while also spurring further adoption of the already-successful AV1 codec and related products and services.

The AV1 codec offers next-generation support for higher-resolution video with lower bandwidth requirements. For years, internet traffic has been overwhelmingly dominated by video streaming, with 4K UHD representing a rapidly increasing share of streaming traffic. Anticipating the continuation and acceleration of this trend, AOMedia developed the AV1 codec—which delivers 4K UHD video at an average of 30 percent greater compression over other popular codecs.

Argon Streams AV1 provides a set of test bit-streams for AV1 video decoders based on formal verification techniques and is the only product to offer IP and ASIC designers full test coverage of their decoder directly against the AV1 specification. As a result, Argon Streams AV1 can give users full confidence that their decoders are fully verified against the specification and fully compatible with current and future AV1 encoder technology.

“In open-sourcing Argon Streams AV1 via AOMedia, Graphcore is providing free access to an incredibly easy and reliable way for AV1 adopters to confirm that their decoders are high quality and conform to the specification. This is an important step in building out a full-fledged ecosystem to support royalty-free, 4K UHD and higher video devices, products, and services,” said Matt Frost, AOMedia chair and director at Google.

In addition to the AV1 codec, Argon Streams products are the industry standard for verification of HEVC (H.265) and VP9 decoders. Furthermore, since Graphcore has now made Argon Streams AV1 available on an open-source basis, it can be freely adapted to support verification for future Alliance video standards.

Argon Streams AV1 – under the hood

The Argon Streams compiler uses a mathematical model to generate a set of bit-streams that spans the entire space of valid AV1 bit-streams.

Most of the bit-streams consist of a short sequence of between 5 and 20 frames; this improves the execution speed during simulation and allows rapid pinpointing of the non-conformances in a client’s decoder design. MD5 digests of the output YUV files are provided to verify that the output is correct. 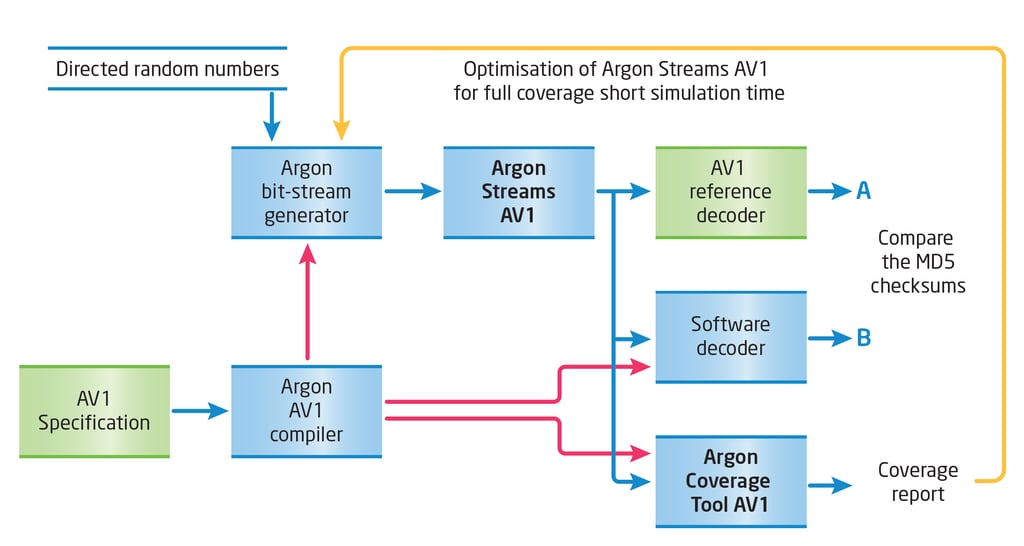 Argon Streams also includes an interactive coverage report, which demonstrates which parts of the specification have been exercised by which test bit-streams. It includes a complete copy of the AV1 specification, and for every equation links a bit-stream that exercises it. This includes complete coverage of every equation in the core specification, every transition in the arithmetic coding engine, every extreme value in the pixel processing pipeline, and all video resolutions in the standard.

The Argon Streams family of video verification tools was originally developed and sold by Argon Design, a Cambridge-based high technology design services consultancy founded in 2009. Argon Streams products have been used by many of the world’s top semiconductor manufacturers and leading IP companies, such as AMD, ARM, Imagination, Chips&Media, MediaTek, and Realtek.

Argon Design was acquired by Broadcom in 2019. In 2021, as part of a transfer of Argon Design’s Cambridge-based employees to Graphcore, Graphcore and Broadcom agreed to license the Argon Streams AV1 Software to Graphcore to enable potential future development and open-sourcing of the product by Graphcore.

“Across several generations of video compression standards, Argon Streams has remained a widely used, reliable, and comprehensive approach to conformance testing. We worked on Argon Streams AV1 in lockstep with AOMedia over the course of several years, so it is enormously gratifying to be able to release this state-of-the-art tool on an open-source basis to support the ongoing growth of the AV1 codec ecosystem,” said Steve Barlow, formerly Argon Design’s CTO and now part of Graphcore’s engineering team.

To learn more and access Argon Streams AV1, visit the dedicated page on the Alliance for Open Media's website.