Molecular dynamics uses computers to simulate the movement of molecular and atomic systems. It is a basic method for simulating the microscopic world, and has a wide range of applications in the fields of physics, chemistry, biology, and material science. Molecular dynamics treats each atom in the system as a basic particle that follows Newton’s second law. Given the initial state and time step of the atom, it analyzes the force on the atom (see the calculation in the red box in Figure 1) and establishes the trajectory of the atom.

Molecular dynamics simulation is essential for calculating molecular forces. The traditional method uses the empirical force field to calculate the force of a molecule. In a specific system, it can simulate a system at the scale of tens of billions of atoms, but the precision is limited and it is difficult to handle the simulation of complex systems. In the case of first-principles molecular dynamics based on density functional theory, the calculation precision is high, but the calculation amount is large. The simulation scale is usually limited to hundreds of atoms, within 100 picoseconds. Deep learning provides a new means to analyze the force of atoms. The DeePMD-kit is a typical example, which has both the computational efficiency of the empirical standpoint and the precision of the first principles.

The network structure of force calculation using DeePMD-kit can be seen in Figure 2. Shown from left to right are the input configuration atomic coordinates, environment matrix, embedding matrix, construction of the Descriptor that satisfies symmetry, total energy (E) of the system, and the reverse force calculation. It is worth emphasizing that the generation and force calculation of the environment matrix should be implemented as a TensorFlow Custom Operator, and the remainder uses TensorFlow’s native Operator. We will now briefly introduce the functions of each part.

Embedding matrix is the most primitive feature. The embedding net (see Figure 2) contains trainable parameters, which can construct suitable representations for the relationship between different types of central atoms and neighbours, which is very important for neural network training.

4. Construction of the Descriptor

This step is mainly to add rotation and displacement invariance to the constructed neural network model, which can improve the adaptability of the model so that the model can still accurately predict the energy when the atom is rotated and displaced. This also reduces the dependence on the training set to a degree.

By calculating the derivative of the total energy E against the position, the force of each atom can be obtained. Therefore, the force analysis part of the calculation includes a neural network inversion, which will lead to a higher memory usage. At the same time, the environment matrix uses a Tensorflow Custom Operator to realize the derivation against the position.

When performing water molecule simulation on the IPU, we use a model in SavedModel format. In order to run the model on IPU, we did the following:

EnvMat is the environment matrix mentioned above. During processing, we have to calculate the similarity of neighbour atoms of each central atom, then sort, and select the top K neighbour atoms of each central atom, and then substitute it into the formula for calculation. So, this Op's bottleneck is not defined as the calculation part, but the sorting part. In the actual implementation, efficient sorting is finally realized through the combination of QuickSort+InsertSort.
Force and Virial Force, according to the forward result of the network, obtain the partial derivative of x. These two Ops involve the problem of global memory access. Taking into account the limitations of IPU, it is impossible to put all the atomic data on one tile. Therefore, we need to split the global data into N pieces, and then reduce sum on N pieces of data, and finally obtain a complete set of data. Although this can ensure the memory of the IPU is no longer limited, it obviously limits the use of the IPU's computing power, so we need to find a better solution.

2. Set the device attributes of the model

3. Simulating water molecules on the IPU 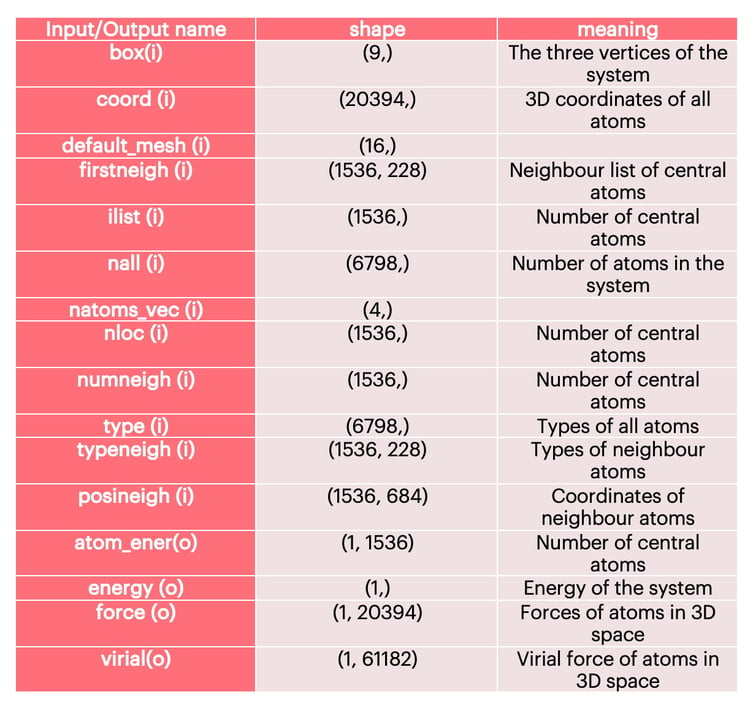 After completing the Custom Operator and setting the device properties, we can finally achieve performance similar to V100 on a system of 1536 central atoms.

We conducted an in-depth analysis of the water molecule simulation. Since the model itself has a backward process, we need to store some forward calculation results with a total size of about 300MB. This part of the memory overhead can be alleviated by recomputation, enabling us to simulate a larger system.

We have successfully performed water molecule simulation on the IPU, with the performance achieved on small systems essentially matching V100 performance. Future work will focus on simulating large systems.