Accelerating Text-To-Speech Models with the IPU

Graphcore has achieved unmatched text-to-speech training performance on the Intelligence Processing Unit (IPU) with Baidu’s Deep Voice 3. The speed-ups are a result of both the processor’s unique architectural features and optimizations in our Poplar software stack, which has been co-designed with the processor.

Converting written text into speech is arguably one of the most challenging areas of speech technology research. Early progress in text-to-speech (TTS) modelling has happened mostly through small iterations of complex multi-stage, hand-crafted pipelines. One family of early approaches referred to as concatenative systems originated in the 1970s and focused on the optimal concatenation of basic speech units. A competing approach that fell under the umbrella of statistical parametric speech synthesis instead used models like Hidden Markov Models and Recurrent Neural Networks to output low-dimensional audio features which fed into signal processing algorithms known as vocoders.

With the arrival of deep learning, it became possible to generate speech with minimal handcrafting by training models on large labeled datasets. DeepMind’s Wavenet model was a pioneering contribution in the area of speech generation, as it significantly reduced the gap between previous state-of-the-art TTS systems and human-level performance. Wavenet directly generated raw audio samples using stacks of causal convolutional layers with dilations.

Although Wavenet was successful in generating natural sounding speech in different speaker voices, the high-frequency autoregressive nature of the model made it challenging to use for low-latency or high throughput inference applications. After Wavenet, various model families followed from different research groups. Among the most prominent were Tacotron from Google, Deep Voice from Baidu and FastSpeech from Microsoft, enabling high-quality, end-to-end speech synthesis.

When the Baidu Research Group released a family of TTS models under the name Deep Voice in 2017, the first two iterations - Deep Voice 1 and 2 - followed the traditional structure of TTS pipelines. Both had separate models for various stages like grapheme-to-phoneme conversion, segmentation, audio duration and frequency prediction and final waveform synthesis.

The Deep Voice 3 model was a major step forward in that the whole TTS pipeline was captured by a single compact model. The Deep Voice 3 model is fully convolutional and uses attention blocks to decode the input text sequence to the output audio sequence representation (which in this case are mel-scale spectrograms). 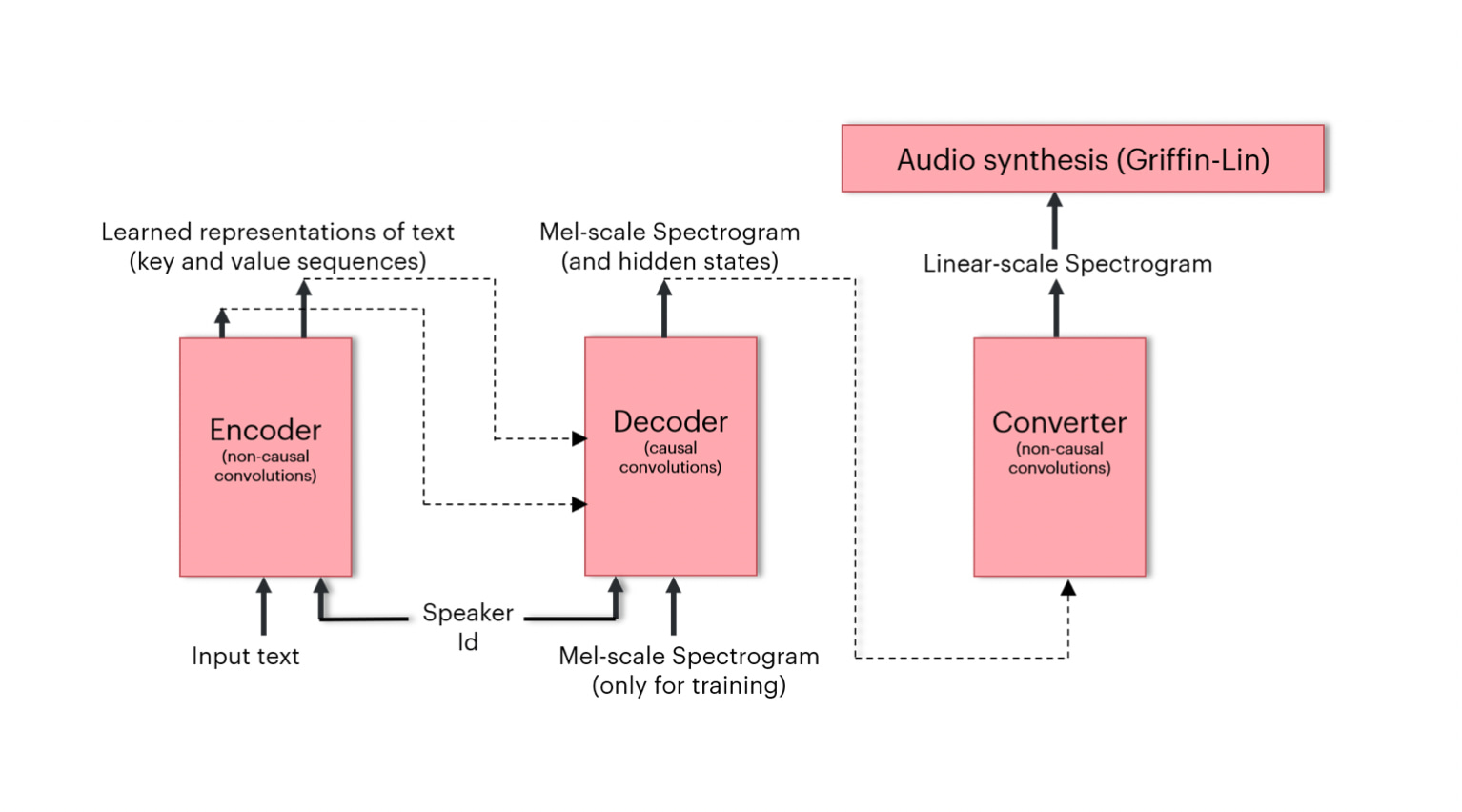 Before we look at the Deep Voice 3 architecture and training performance, here is a brief explainer on spectrograms for those who need it.

Spectrograms are a representation of the frequency content of a signal over short overlapping windows obtained via Short-Time Fourier Transforms. Many speech technology applications require low-dimensional representations of the audio signal and in such cases mel-scale spectrograms are used. 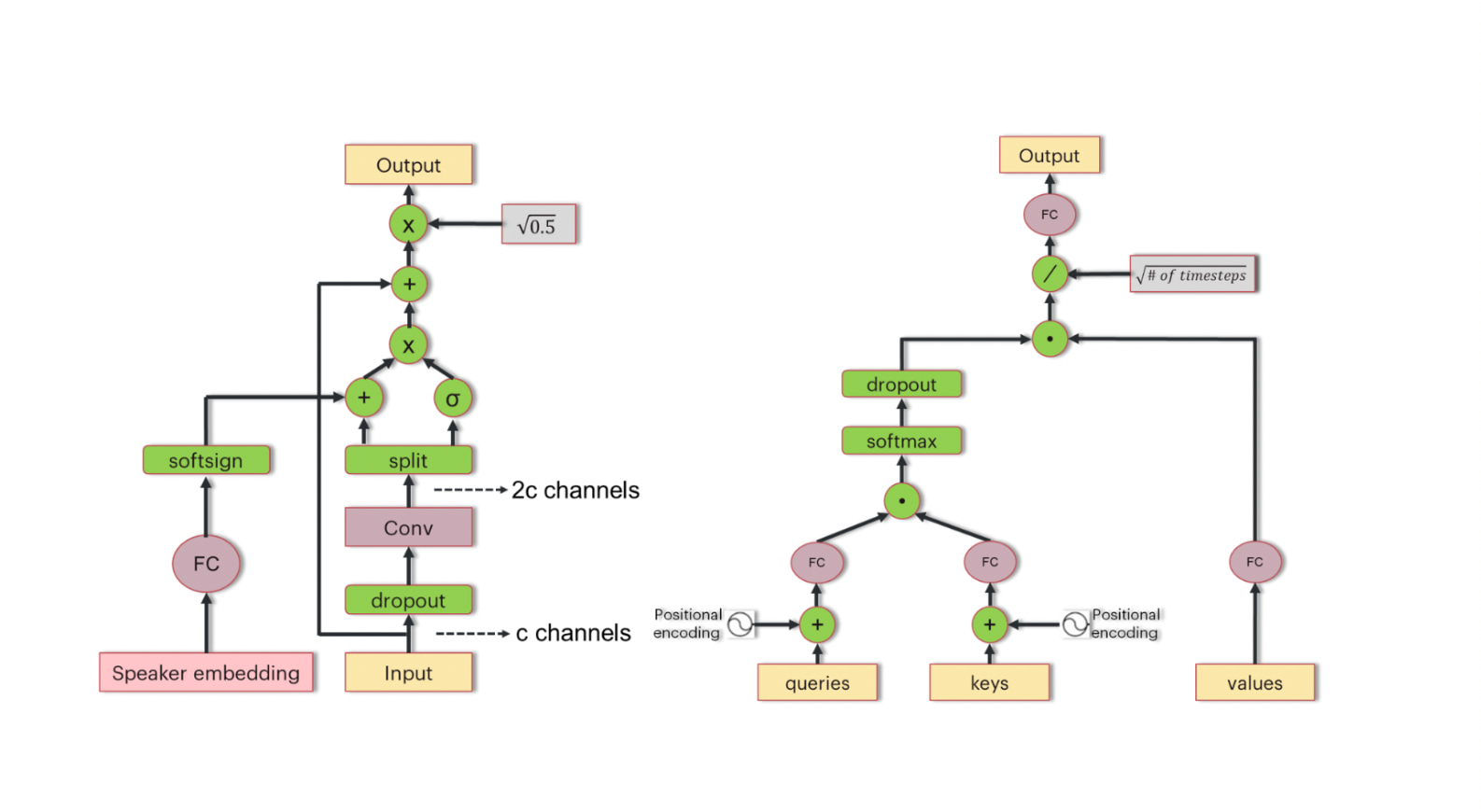 Figure 2: Main building blocks of the Deep Voice 3 model. The block on the left is a one-dimensional convolutional block with gating and a residual connection. The block on the right is a dot-product based attention block.

We benchmarked the Mark 1 (MK1) and Mark 2 (MK2) IPUs against a leading 12nm GPU for Deep Voice 3 training using the VCTK Corpus which is a multi-speaker dataset and contains 44 hours’ worth of recordings. Figure 3 compares the throughput numbers during training for the IPUs and the GPU alternatives. With data-parallel training on a C2 card with 2 MK1 IPUs (batch-size of 4), a throughput of 1260 queries per second (QPS) is achieved – a 6.8x speedup over the GPU (which uses the same power as the C2 card). To put this in other terms, to complete one training epoch over the VCTK Corpus, it takes about 35 seconds with a MK1 C2 card, compared with about 4 minutes on the GPU.

Even with the announcement of the latest GPU we expect the IPU MK2 advantage to be ~10x based on published GPU comparison results. 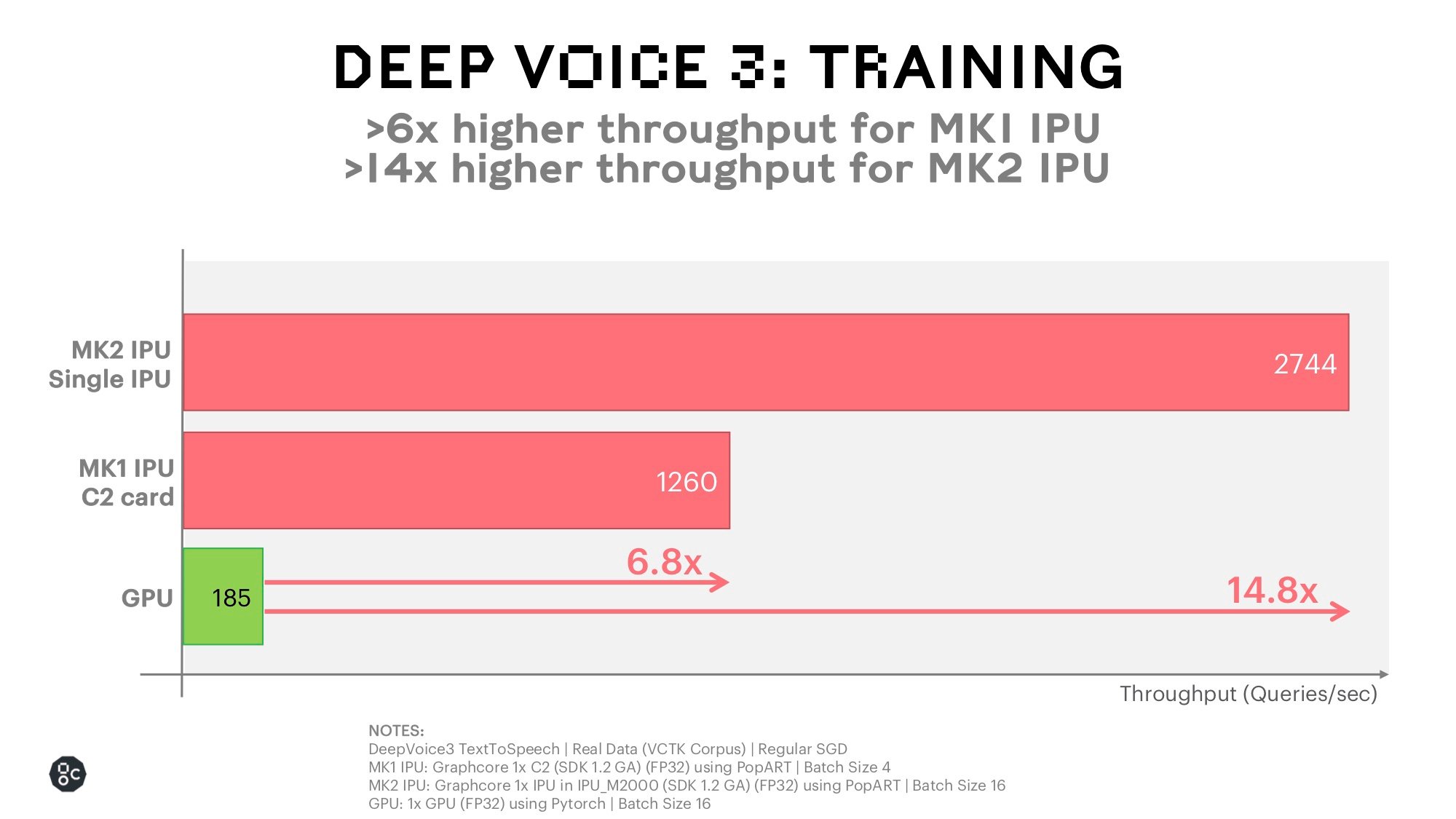 How does the IPU accelerate Deep Voice 3 Training?

The IPU is particularly efficient at processing convolutional models because of multiple factors, including its unique memory organization and massive parallelism (as detailed in our recent computer vision blog). These architectural advantages result in impressive speed-ups when training a convolutional model such as Deep Voice 3.

Our PoplarTM software stack is also designed specifically for the IPU. Poplar enables a large degree of parallelism for the one-dimensional convolutions and matrix multiplications which dominate the Deep Voice 3 model.

The IPU’s novel memory organization is equally a key factor. The MK1 IPU contains 1216 cores which perform compute on the processor’s own distributed 300MB of on-chip memory which limits the need to access external memory for data. This is a huge advantage for the IPU in comparison with GPUs which are limited by their bandwidth to external memory.

Below are some audio samples generated using our implementation of Deep Voice 3 on the IPU. Interestingly, even though some of the words used to generate the speech samples were not in the original training dataset, the model is still able to synthesize the corresponding speech effectively.

"He likes the taste of Worcestershire sauce."

"She demonstrated great leadership on the field."

Figure 4 shows a generated mel-scale spectrogram for the text “She demonstrated great leadership on the field”. Next to this is a visualization of the audio signal generated via the Griffin-Lin algorithm, acting on the output of the converter network. 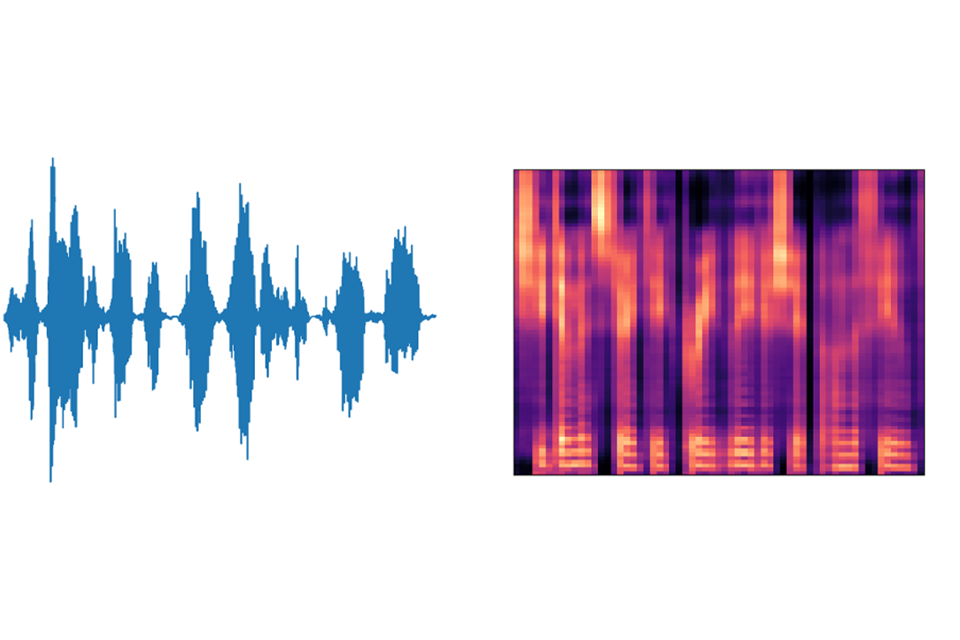 Figure 4: The figure on the right is a mel-scale spectrogram generated by a trained decoder network of the Deep Voice 3 model. The figure on the left is the audio synthesized by the Griffin-Lin algorithm using the output from the trained converter network.

Real-World Text-to-Speech Applications with the IPU

What are the potential benefits of using an IPU for TTS applications? For a use case such as audiobooks which are generated in the author’s voice, fast training of speech synthesis models can lead to savings in time, money and energy spent on computational resources. In educational and consumer internet applications, as well as assistive technologies for people with disabilities, there is significant potential for using voice cloning models which are related to TTS models. Accelerating these applications with the IPU provides similar advantages to those already mentioned, while improving user experience and quality of life.

In real-time applications where low latency is important, efficient inference by TTS models is critical and this is another area where IPUs can bring a huge benefit, since the IPU is effective for both training and inference.

The IPU’s capacity to accelerate TTS models such as Deep Voice 3 opens up the opportunity to create entirely new classes of TTS models which fully utilize its unique processor architecture. We look forward to seeing what these innovations entail in the near future as the field develops.

Accelerating ResNet-50 Training on the IPU for MLPerf