Academic research is at the leading edge of the AI revolution. The tools that will ultimately be used in commercial and public-sector applications are forged in universities and other research institutions around the world.

As part of our commitment to supporting and accelerating such research, we are launching the Graphcore Academic Programme - sharing our technology, resources, and expertise.

As researchers who have already worked with Graphcore discovered, using the Intelligence Processing Unit (IPU) does much more than just accelerate machine intelligence workloads. Its designed-for-AI architecture broadens the scope of what is computationally possible by enabling characteristics such as sparse compute and fine-grained parallelism.

Participants in the Graphcore Academic Programme will receive free access to our IPU compute platform in the cloud. Each system comprises 16x Mk1 GC2 IPUs on 8x C2 PCIe cards, inside a Dell DSS8440 server.

Other benefits of the programme include support and regular check-ins from Graphcore’s in-house researchers and engineers. Graphcore may also offer support with grant applications and funding proposals.

More details on the Graphcore Academic Programme and information on how to apply can be found at graphcore.ai/academic.

We will be prioritising access to projects and proposals that fall into the following areas. However, we will also consider other proposals that include innovative applications of the IPU:

The Graphcore Academic Programme builds on the body of academic research that has already been produced using the IPU. Some of the world’s foremost academics and institutions have published papers detailing advances made possible by our compute platform – among them researchers from Imperial College London, UC Berkeley, UMass Amherst, and the University of Bristol.

Their work variously details both quantitative performance gains, and novel applications for the IPU based on specific capabilities not found in other processor types. In each case, the results point to future research directions – enabling a virtuous cycle of exploration and discovery.

“The work we did with Graphcore on parallel training of deep networks with local updates illustrates how the IPU’s radically different processor architecture can help enable new approaches to distributed computation and the training of ever-larger models,” said Professor Pieter Abbeel, UC Berkeley.

“It is indicative of how Graphcore’s technology does not just deliver quantitatively better performance, against measures such as throughput and latency. The technology is also opening up fundamentally new approaches to the computational challenges that could otherwise hinder the progress of AI.”

At Imperial College London, Professor of Robot Vision, Andrew Davison’s team has been using Graphcore’s IPU to solve some of the challenges associated with computers visually interpreting the world around them. Their paper, Bundle Adjustment on a Graph Processor demonstrates how Gaussian Belief Propagation can be used on the IPU to solve the classical computer vision problem of bundle adjustment.

“Having led one of the first academic teams to conduct and publish research based on the Graphcore IPU, this is a technology that brings both quantitative and qualitative benefits. We saw the IPU outperforming legacy chip architectures in our computer vision work, but also expanding our understanding of what was computationally possible in this field,” said Andrew Davison, Professor of Robot Vision at Imperial College London.

Researchers at the University of Bristol have been using the IPU to explore new approaches to some of the complex mathematics associated with analysing data from the Large Hadron Collider at CERN, as outlined in their paper Studying the potential of Graphcore IPUs for applications in Particle Physics.

“Our work examined the applicability of Graphcore’s IPU to several computational problems found in particle physics and critical to our research on the LHCb experiment at CERN. The capabilities and performance gains that we demonstrated showed the versatility of the IPU’s unique architecture. Moreover, the support that we received from Graphcore has been critical, and remains so, in our ongoing programme of exploring the power of IPUs for processing particle physics’ vast and rapidly increasing datasets.” said Jonas Rademacker, Professor of Physics at the University of Bristol. 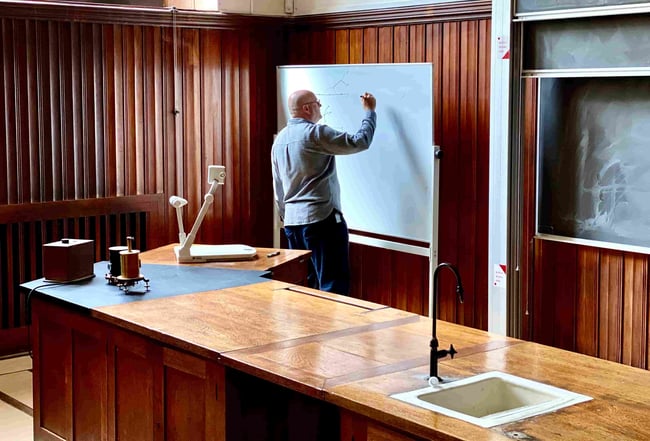 For more information on published research papers, visit our Resources page. To apply for the Graphcore Academic programme submit your proposal here.