Graphcore Research explain how their novel technique “Proxy Norm” paves the way for more memory-efficient training of convolutional neural networks. In Graphcore’s new paper, Proxy Norm is found to retain the benefits of batch normalisation while removing the complication of batch dependence that previously led to inefficient execution. Proxy Norm could help AI engineers to ensure efficiency of execution in future as machine learning model sizes continue to grow and datasets keep getting larger.

Normalisation is critical for successfully scaling neural networks to large and deep models. While the scope of normalisation was originally limited to input processing (Lecun et al., 1998), it was taken to another level with the introduction of the technique Batch Normalisation (Ioffe & Szegedy, 2015) that maintains intermediate activations normalised throughout the network.

Figure 1: Each subplot corresponds to a specific technique of normalisation characterised by its groups of components, highlighted in blue, sharing the same normalisation statistics. In each subplot, the tensor of intermediate activations is constituted of the batch axis N, the channel axis C, and the spatial axes (H, W). Figure adapted from (Wu & He, 2015).

Let’s now look in more detail at Batch Norm to understand why channel-wise normalisation and expressivity preservation are beneficial, and why batch dependence is a complication. Following this, we will then introduce Graphcore Research’s novel technique Proxy Norm, as presented in our paper “Proxy-Normalizing Activations to Match Batch Normalization while Removing Batch Dependence”, and show how Proxy Norm can be used to retain these two benefits of Batch Norm while removing batch dependence. 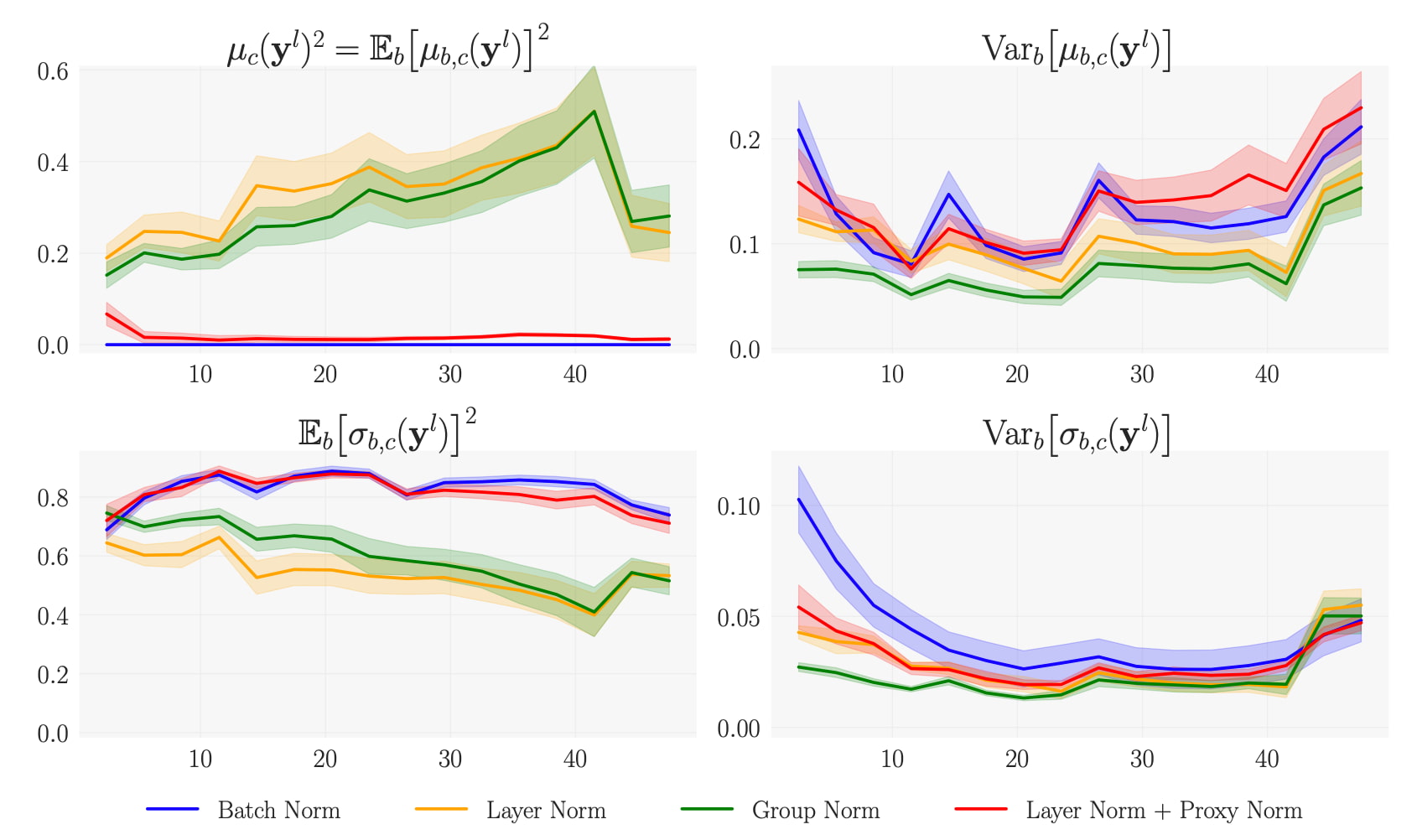 Figure 2: Squared mean (left) and variance (right) of instance means (top) and instance standard deviations (bottom) averaged over all epochs of the ImageNet training of ResNet-50 with various norms. Instance statistics are computed after the normalisation at different depths of layer (x-axis).

The main symptom of Batch Norm’s batch dependence is the presence of a noise stemming from the random choice of the different inputs in each mini-batch. This noise is propagated in between Batch Norm layers and “fuelled” at every Batch Norm layer when full-batch statistics are approximated with mini-batch statistics. The noise is therefore stronger when the mini-batch is smaller. This phenomenon translates into a specific regularisation of Batch Norm (Luo et al., 2019), whose strength depends on the noise amplitude and thus on the mini-batch size.

Unfortunately, this regularisation cannot be easily controlled. When the goal is to decrease the strength of this regularisation, the only way to achieve this is to increase the mini-batch size. Depending on the task and the strength of regularisation needed, Batch Norm then imposes a lower bound on the mini-batch size compatible with optimal performance. When the “compute” mini-batch size is below this lower bound, maintaining optimal performance requires an “expensive” synchronisation of statistics across multiple workers to yield a “normalisation” mini-batch larger than the “compute” mini-batch (Yin et al., 2018). The main issue that can result from batch dependence is therefore an inefficiency of execution.

Resolving this issue would make a real difference when using Graphcore’s IPU, as the extra acceleration and energy savings that the IPU provides are obtained in exchange for tighter memory constraints. Even with alternative accelerators relying less on local memory, this issue could become critical in the future. As datasets get larger and larger, we indeed expect that stronger memory constraints will be imposed by the use of larger and larger models. The use of larger datasets for a given model size also implies that less regularisation will be required, resulting in the requirement of larger and larger “normalisation” mini-batch to guarantee optimal performance when using batch-dependent norms such as Batch Norm.

So how can we retain Batch Norm’s benefits while removing batch dependence?

The two benefits of Batch Norm (i.e. the channel-wise normalisation and the preservation of expressivity) cannot be simultaneously retained with the prototypical batch-independent alternatives to Batch Norm. On the one hand, Layer Norm does a good job at preserving expressivity, but only at the cost of channel-wise denormalisation. On the other hand, Instance Norm guarantees channel-wise normalisation, but only at the cost of a strong alteration of the expressivity. While Group Norm can provide a better trade-off between Layer Norm’s issue and Instance Norm’s issue, it still cannot square the circle. In short, all the prototypical batch-independent alternatives to Batch Norm lead to a degradation of performance.

To resolve this, we need a batch-independent normalisation that can avoid channel-wise denormalisation while simultaneously preserving expressivity. We can make these two requirements more precise by noting that:

These observations have guided our design of the novel technique Proxy Norm. Proxy Norm assimilates the output of the normalisation operation to a Gaussian “proxy” variable that is assumed close to channel-wise normalised. This Gaussian proxy is fed into the same two operations as the real activations, namely the same learnable affine transform and the same activation function. After these two operations, the mean and variance of the proxy are finally used to normalise the real activations themselves. This is depicted in Figure 3.

Figure 3: Proxy Norm is incorporated into the neural network by adding the "cheap" red operations on top of the pre-existing black operations

Proxy Norm enables to preserve expressivity while compensating for the two main sources of channel-wise denormalisation, namely the learnable affine transforms and the activation functions. This leads us to adopt a batch-independent normalisation approach that combines Proxy Norm with Layer Norm, or Group Norm with a small number of groups. As can be seen in Figure 2, this batch-independent normalisation approach preserves channel-wise normalisation while minimising any alteration of the expressivity. With this approach, we retain Batch Norm’s benefits while removing batch dependence.

The next question is whether this approach also leads to good performance in practice. Comparing Batch Norm to batch-independent approaches requires specific care to be taken to properly account for the added regularisation stemming from batch dependence with Batch Norm. To “subtract away” this regularisation effect, we therefore include extra regularisation in each of our experiments.

As can be seen in Figure 4, when that specific care is taken, the ImageNet performance of our batch-independent approach consistently matches or exceeds that of Batch Norm across various model types and sizes (note that our variant of EfficientNet is introduced in an associated blog post and paper). This means that our batch-independent approach matches Batch Norm not only in behaviour, but also in performance!

We see as a side product of our analysis that while an efficient normalisation is necessary for good ImageNet performance, it must also come with appropriate regularisation. On even larger datasets, we expect that an efficient normalisation would be sufficient in itself, given that less regularisation would be required (Kolesnikov et al., 2020; Brock et al., 2021).

In this work, we delved into the inner workings of normalisation in convolutional neural networks. We gathered both theoretical and experimental evidence that an efficient normalisation should: (i) maintain channel-wise normalisation and (ii) preserve expressivity. While Batch Norm maintains these two properties, it also introduces the complication of batch dependence.

When investigating the prototypical batch-independent alternatives to Batch Norm, we found that the channel-wise normalisation and the preservation of expressivity are difficult to obtain simultaneously. This led us to design the novel technique Proxy Norm, which preserves expressivity while maintaining channel-wise normalisation. We then adopted a batch-independent normalisation approach based on the combination of Proxy Norm with Layer Norm, or Group Norm with a small number of groups. We found that such an approach consistently matches Batch Norm in both behaviour and performance, while maintaining batch independence at all times.

Our approach paves the way for more memory-efficient training of convolutional neural networks. This memory efficiency gives a significant edge to accelerators such as Graphcore’s IPU that leverage local memory to boost the efficiency of execution. In the long term, we expect that this memory efficiency will be critical even on alternative hardware.

This article was originally published in Towards Data Science.

Read the article in Towards Data Science